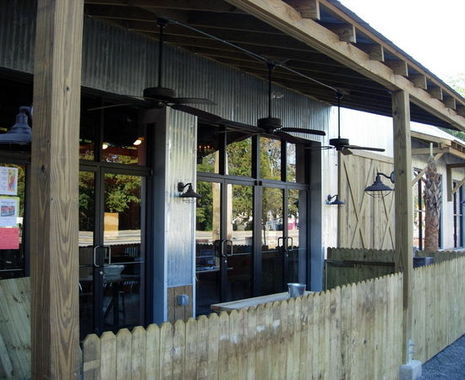 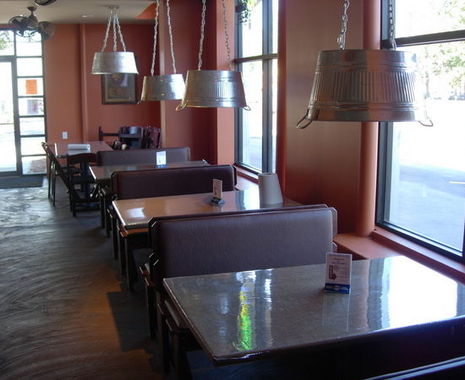 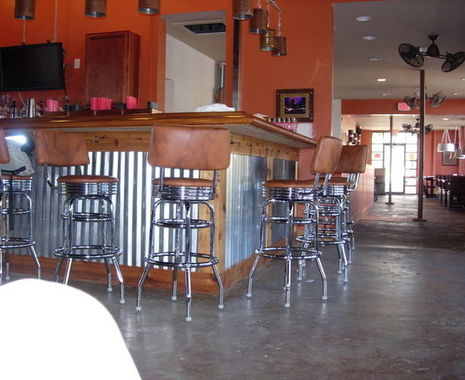 This building was originally constructed as an automotive service station in the late 1940s and has since experienced many renovations to suit the numerous businesses that have occupied the building over the years. Most recently the building housed a caf� type restaurant. Chastain
Construction, Inc. completed an interior upfit and an exterior renovation of the 1660 square foot existing space as well as constructing an addition which is approximately 1000 square feet of retail/office space attached to the south end of the building. The interior is finished in a rustic style featuring stained concrete floors, chrome bar stools as well as unique and creative overhead lighting. The bar was constructed using stained wood as the frame and corrugated metal facing. In place of the traditional ceiling fan, old fashioned metal fans mounted to the ceiling provide a decorative alternative for air circulation. The exterior of the building and the grounds surrounding the building were also renovated including an extensive landscape design and front and rear parking areas. Corrugated metal siding as well as oversized barn type doors comprise the exterior walls to emulate the appearance of an old barn or shed giving this Fiery Ron's Hometeam BBQ restaurant a unique look for Chef Aaron Siegel's exceptional barbeque.